Welcome to the fourth part of my OSRS reversing series. I’ll be trying to dump a lot of “essential” stuff at a quick pace (for the amount of stuff there is to do) this blog.

Contents of this blogpost are based on the 26.2.2021 build of osclient.exe

osrs binary used in this analysis

Items or interactable objects don’t point to the definitions, but they have ID’s. Where do we get started here? Well I remember we found renderlist_add_object in the last blog entry, meaning we can start investigating where that function is called. By repeating the function patching thing we did but this time backwards from the function (excluding the functions that handle players and npc’s), I quickly figured out that FUN_00115800 was responsible of adding static map entities to the renderlist. Here I went on a nice trip to figure out where the static objects come from (I tried using this method before the renderlist thing).

Let’s start with the important part of FUN_000a17a0, with renamed stuff.

After a bit of inspecting it turned out that here we had an array of “map chunks” to be loaded, this function is called every time in OSRS when you move far enough and get a small “loading” freeze. You could technically hook the function here and iterate map objects when loaded, but externally it did not work out due to some of the data getting overwritten before you had the chance to read it. But I do not suggest this for just static objects especially due to the fact that you will need to handle dynamic objects separately too.

It’s still a god damn mess, but it took me a while as I reimplemented the entire function in my client to render FUN_00115800 parameters in the world for easier inspection on mass, using x64dbg to dump the parameters is of course possible, but very hard to get anything concrete out of it due to the sheer volume of calls with “hard” to figure out parameters.

In the end “useless” for object listing due to the renderlist proving to be a better method. But what it did help us with is identifying FUN_00115800 parameters which will help us figure out object definitions. Let’s rename some stuff and we get the following for FUN_00115800

Now, I really want to know where object_id is used, because a key to the definition is likely the ID.

And right in the beginning we see the following:

What we had there was a pointer array and its max size. And as we can see from the decompiler output every index (object id) that is looked up from the array goes through a object_id % size operation, which would mean that even objects with id’s in the tens of thousands would be fine to look up. I’m next to a trusty tree with the ID 1276 I always tend to use for testing so I’ll try and look its ID up from the list.

Definition we found was for a Ladder

Isn’t that interesting? By going to 1276 we’ve arrived at a Ladder for some reason. But some keen eyed readers may have noticed where this is going based on the snippet above. Let’s look at it again.

So while we don’t get a null pointer at puVar6, we check if our object_id matches *puVar6, meaning the first variable of the struct pointed to, which in this case as we can see in the ReClass image is the ID of a ladder, and if they aren’t a match, like 1276 and 17384 aren’t, we should read the pointer from puVar6[8] which is the same as puVar6 + 0x40 to get to the next definition.

Success. We found the name for our object.

Here’s a few snippets that should let you read id’s as you please, this code includes some of the structure definition for objects too.

I’d keep definition_arr and definition_node structs close to heart, they are used for all other definitions too. You’ll likely run in to similar code in OSRS a lot with different definitions.

Now let’s do this again with item definitions! Or not, because it’s been literally over a month and I honestly can’t remember where I found it. But it’s FUN_000d73b0 , it’s being referenced in tons of different places so I could probably make some method up, but just go look at it.

It’s the same method, new location. For items I haven’t got much of the definition reversed for you due to not having to troubleshoot, and the fact that I read my item definitions from a file, but you can easily go look at different definitions to figure it out, you may want to do this as it enables you to for example disable action menu options like bone burial etc. if you overwrite string pointers. But you can use the following to test with identical code to what was done with object definitions.

This is going to be easy, thank god. In fact so easy that I’m not once again writing that much. The NPC object from part 1 of the series points to the definition! Why didn’t they think of this for the items and static objects :/..

But it’s not all fun and games though. If you implemented object and NPC definitions you may now notice that there are some objects that don’t have proper definitions for them, and thats what the variables with “version” in the name were for. 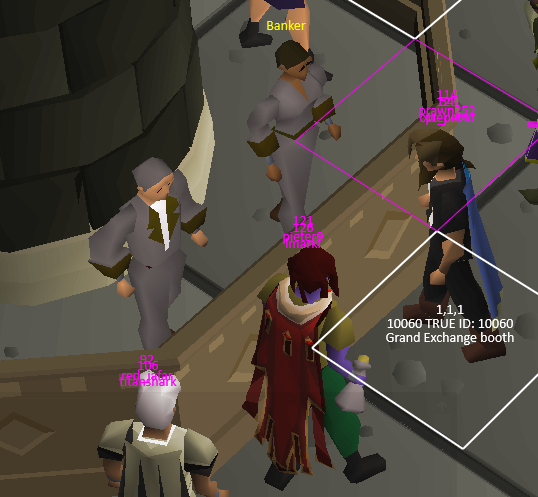 Pretty sure that gray guy and the booth in front of them should be like any other right? Well not exactly. The game has something I can only describe as definition versions. For example that banker, or actually 1 booth and 1 banker in every bank in the game has multiple versions, there are also invisible NPCs around in cities and some quest NPCs have issues too, but why? Well there’s a few reasons related to the fact that the OSRS game code apparently doesn’t allow not transmitting certain NPCs or objects based on game mode or quest states. Examples:

I’ve investigated this again ages ago so here is some quick information dumping on the subject. We start with this in the render_npcs function of part 1.

and the function is as following:

The first PTR_01894b78 works pretty well for NPC versions iirc. but for game mode changes we need to look at FUN_000be990

I’ve also found that I’ve not had to implement anything past those, haven’t ran in to edge cases as of now.

So for the next function this is the relevant part

So in a nutshell what we want to re-implement now are the following:

If you want to do it yourself you absolutely can, I just wanted to document the where and why. Here’s a proof of concept for you though. Very little to be changed to use with object definitions. Just definitions_array and the struct type iirc.

Here’s a reclass project file that contains a bit of interesting player stuff, likely the same for NPCs (besides the definitions) but unconfirmed.

Sharing these structs as a reclass project as it contains hitsplat stuff and health bars, and you may want to figure out where those are handled so you can use ReClass’s “Find out what writes to this address” feature.

Using a write breakpoint will tell you where code writes to an address osrs_blog.rcnet

This was just dumping a lot of essential stuff I really wanted to get out but never really felt like they warranted full blog posts due to being a lot of smaller parts of the whole.

Feedback, complaints, whatever are easiest sent to @alert_insecure on twitter or alternatively email atte@reversing.games if you’re old school like that.

With the release of the Steam version of Old School RuneScape, the game client was ported from its old Java version to a native C++ version so I figured what’s a better time to start looking in to ...

Welcome to the second part of my OSRS reversing series. In the last part we found out how trivial finding players and NPCs is. In todays blogpost we have another challenge though, how do we get scr...

Welcome to the third part of my OSRS reversing series, today we’re finding all the things, kinda. We’ll be looking at actually iterating what I’ve called the render list, which seems to be the bes...